[via OCR:] The Rev. Gordon J. Kirk has resigned as pastor of the Wyoming Avenue Baptist Church at 121-127 E. Wyoming ave.

He enters retirement after serving eleven and a half years as leader of the Feltonville church coming from Brockton, Mass. in December of 1966. His resignation will take effect April 30.

Pastor Kirk will then become part of a program in the American Baptist Churches, USA called Ministers-at-Large (MAL) in which he will be assigned to serve in parishes between pastorates of other men. This work will take him anywhere in the United States where American Baptist churches are located.

During his years of service at the Wyoming Church, an annex was purchased, remodeled and furnished for the use of many groups within the church. The annex also contains a board room in honor of A. Arthur Turner, a library which is in process of completion at this time, and a youth recreation room in the basement of the building.

Several new programs were instigated including a Day nursery for pre-school children and a youth outreach into the neighborhood through the activities of a recreational nature on Friday evenings.

Evangelistic campaigns have been held including a cooperative effort in the Northeast in which Dr. Leighton Ford was the principal speaker.

At the present time, the church is preparing to put a new roof on the total church building and strengthen the stained glass windows which are showing signs of serious deterioration.

Mrs. Kirk completed three years of service as Moderator of the lOO-church Philadelphia Baptist Association Saturday at the annual meeting held at the Roxborough Baptist Church.

In retirement, Pastor and Mrs. Kirk plan to make their home in Merrimack, N. H. 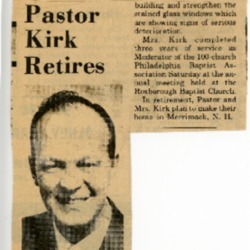